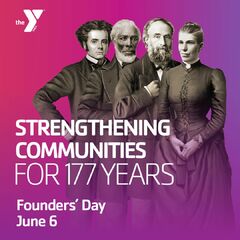 Strengthening Communities for over 175 Years: a Brief History of the Y

On June 6, the YMCA marks 177 years as a nonprofit dedicated to strengthening communities through programs and services designed to foster youth development, healthy living and social responsibility. Here are five past notable events and achievements that demonstrate the Y’s commitment to the communities it serves:

The effects of COVID-19 reached across the country, closing the doors to every single one of the 2,650 YMCAs across the country. However, the Y was able to do incredible work over the past year, thanks to our staff and volunteers.

When schools and childcare centers first closed their doors, the Y offered emergency childcare services to essential workers at nearly 1,400 locations. As shelters struggled to offer socially distant beds, the Y provided space for people facing homelessness to live and sleep safely. As seniors felt the effects of social isolation, the Y provided wellness checks and connection to our most vulnerable. As unemployment rose hunger increased, the Y answered the call by providing food—through grocery boxes and prepared meals for the whole family—at over 1,300 locations. And as schools transitioned to remote schedules in the fall, forcing parents and caregivers to juggle child care and work, the Y stepped in again and established virtual learning centers to provide children with a safe place to learn.