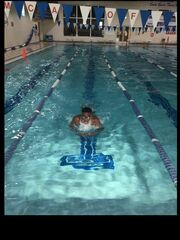 The 2021 swim meet season at the Cumberland Cape Atlantic YMCA featured Seals swimmers making names for themselves as well as making personal progress. Head coach Mike Blacksten said, “The team made a lot of advances during this past season, and we are very proud of their accomplishments.” The team included seventy swimmers of ages ranging from six to eighteen.

Looking to the future, Coach Blacksten said, “We are planning on taking the Vineland Seals year-round. They will compete in both USA and YMCA meets.

We are also planning on having a separate team that will swim in dual meets only.”

Individuals who are interested in participating in this successful swimming team are invited to contact Blacksten at ymcaswimteam@ccaymca.org or (856)691-0030, extension 156.