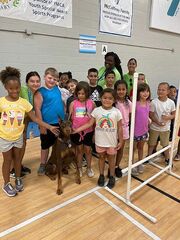 Last week, the numerous summer camps at the Cumberland Cape Atlantic YMCA celebrated Animal Planet Week.  This included kids aged three to fifteen as well as others at Camp Merrywood. The six to eight year olds in Camp Hiawatha enjoyed a special animal treat, a demonstration of the sport of dog Agility. This was held for two groups of approximately forty youngsters each at the Y facility, plus via live streaming for another fifty-five campers at the Y’s Somers Point location.

Terri Booth, the YMCA’s senior director of Child Development, said, “We vary the themes for camp each week. To have a demonstration of dog Agility gave the campers a look at a popular sport that they probably wouldn’t get to see otherwise. The kids on site in Vineland and at Somers Point really cheered and clapped for the performance.”

The dogs who showed off jumping over horizontal bars, going through a tunnel, and jumping through a tire were Doberman Pinschers Sherman and Holly. Their owner, Christine Ward Garrison, also showed some of Holly’s obedience skills.

The attached photo shows Holly and some of her new fans, the Hiawatha campers.

Camps continue through the end of August, and limited registrations are still available. For information, please call the Cumberland Cape Atlantic YMCA at (856)691-0030 or check www.ccaymca.org.